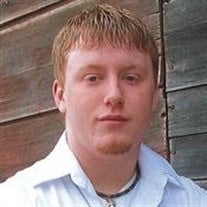 Brandon Eisenbarth, 21, of Morgan died Tuesday, December 6, 2011 as the result of a motor vehicle accident. Services will be held at 10:30 a.m. on Friday, December 9, 2011 from St. Michael’s Catholic Church in Morgan. Visitation will be held at the church on Thursday, December 8, 2011, from 4 until 7 p.m., and continue on Friday for one hour prior to services. Arrangements are with Nelson-Martin Funeral Service of Morgan. E-mail condolences may be sent via www.nelsonmartinfuneralservice.com. Brandon Michael Eisenbarth, the son of Theresa “Terry” Kraushaar and Michael Eisenbarth, was born July 11, 1990 in New Hampton, Iowa. He grew up in rural Morgan and received his formal education in Cedar Mountain schools, graduating from Cedar Mountain High School in 2009. Brandon furthered his education at Ridgewater College, attending the Willmar campus for one year and then transferring to the Hutchinson campus. While studying at Ridgewater, he worked at Target, both in Willmar and Hutchinson. Brandon recently began his employment with Daktronics in Redwood Falls. As a student at Cedar Mountain he was a member of FFA and the drumline, and belonged to the football team. Brandon enjoyed video games, playing the drums, riding his motorcycle and four-wheeler, and music. He also enjoyed fireworks and bonfires. Brandon loved spending time with family and friends, especially swimming and fishing at his grandpa’s place and at his aunt and uncle’s place as well. He enjoyed making people laugh and was always joking around! Brandon is survived by his father Michael “Bony” Eisenbarth of Morgan; his mother Terry Kraushaar of Austin; his girlfriend Sarah Sonnek of Mankato; and his grandfather Robert Kraushaar of Austin. Also surviving are aunts, uncles, many friends and relatives. Blessed be his memory.

Brandon Eisenbarth, 21, of Morgan died Tuesday, December 6, 2011 as the result of a motor vehicle accident. Services will be held at 10:30 a.m. on Friday, December 9, 2011 from St. Michael&#8217;s Catholic Church in Morgan. Visitation will be... View Obituary & Service Information

The family of Brandon Michael Eisenbarth created this Life Tributes page to make it easy to share your memories.

Send flowers to the Eisenbarth family.