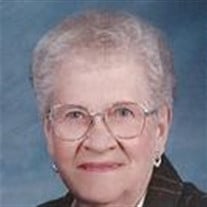 Blanche Serbus, 95, of Willmar and formerly of Redwood Falls died Saturday, July 15, 2017 at Bethesda Grand Nursing Home in Willmar. Mass of Christian Burial will be held at 11 a.m. on Friday, July 21, 2017 from St. Catherine’s Catholic Church in Redwood Falls with burial to follow in the church cemetery. Visitation will be held at the church on Friday, from 10 until 11 a.m. Arrangements are with Nelson-Hillestad Funeral and Cremation Service of Redwood Falls. E-mail condolences may be sent via www.nelson-hillestad.com. Blanche Rose Serbus, the daughter of Albert and Mary (Malecek) Knisley, was born November 6, 1921 in Lamberton. She grew up in the Bechyn area. Blanche was baptized and confirmed at St. Mary’s Catholic Church in Bechyn and received her formal education in country schools in the Danube and Olivia area. On June 16, 1942, Blanche married Ben M. Serbus at St. Mary’s Catholic Church in Bechyn. Blanche and Ben farmed and raised their family on land west of Bechyn. They moved into Redwood Falls in 1964 and had celebrated 64 years of marriage together before Ben’s death in 2006. On August 24, 2007, Blanche moved to Bethesda Pleasant View in Willmar. While living near Bechyn, Blanche was a member of St. Mary’s Catholic Church. She taught religion classes there for many years and also served as president and treasurer of the Altar and Rosary Society. After moving to Redwood Falls, Blanche was a member of St. Catherine’s Catholic Church and the CCW. She was employed as a cook at the Lincoln School in Redwood Falls until retiring in 1982. Blanche also volunteered at Sunwood Good Samaritan Care Center and the Redwood Clothing Center. She enjoyed her 23-year-long membership of the Bechyn Birthday Club. Blanche was a wonderful cook and baked kolaches and amazing desserts for all the family gatherings. She enjoyed playing cards and bingo, and reminiscing about days past with friends and family. Blanche’s keen sense of humor and wit will be sadly missed. She could make everyone laugh with her one-liners. Blanche is survived by her sons Jerome (Pam) Serbus of Bemidji, and Douglas (Donna) Serbus of Redwood Falls; daughter Donna (Kenneth) Ridl of Spicer; 17 grandchildren; 35 great-grandchildren; 19 great-great-grandchildren; and many nieces and nephews. She was preceded in death by her parents; her husband Ben in 2006; sisters Irene Buchtel and Beatrice Swoboda; brothers William, John, Harry, Albert Jr., Lloyd, and Cratin; daughter-in-law Patti Serbus; sister-in-law Angie Kinney; two great-grandchildren; and one great-great-grandson. Blessed be her memory.

The family of Blanche Serbus created this Life Tributes page to make it easy to share your memories.

Blanche Serbus, 95, of Willmar and formerly of Redwood Falls...