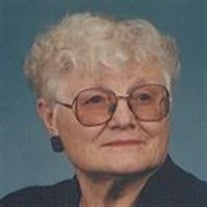 Blanche Kohler, 91, of Redwood Falls died Monday, February 7, 2011 at Garnette Gardens. Mass of Christian Burial will be held at 10:30 a.m. on Friday, February 11, 2011 from St. Catherine’s Catholic Church in Redwood Falls with Father Michael M. Doyle officiating. Burial will follow in the church cemetery. Visitation will be held Thursday, February 10, 2011, from 4 until 7 p.m., with a prayer service at 6:30 p.m., all at the Nelson-Martin Funeral Home in Redwood Falls. Visitation will continue at the church on Friday for one hour prior to services. Arrangements are with the Nelson-Martin Funeral Service of Redwood Falls. E-mail condolences may be sent via www.nelsonmartinfuneralservice.com. Blanche Genevieve Kohler, the daughter of Michael and Julia (Pistulka) Kramer, was born December 22, 1919 on the family farm in Vesta Township, Redwood County. In 1935, she moved with her family to a farm near North Redwood. Blanche received her elementary education in District 114 rural school and graduated from Redwood Falls High School in 1938. She attended Mankato Beauty College, graduating in 1939. Blanche then lived in Redwood Falls and worked at Elouise’s Beauty Shop until her marriage. On January 31, 1949, Blanche married James C. Kohler and the couple set up housekeeping on their farm just west of Redwood Falls. Blanche was an active farm wife. She kept a large garden, raised chickens, sold eggs, and raised the calves from the Kohler’s dairy barn. Blanche quit working as a beautician after her marriage, but she “did hair” all of her life. She was a life-long athlete, playing softball on the Seaforth ladies’ team in her early years. Blanche bowled with a league for nearly 50 years and was regularly seen on the golf course. In her later years, she enjoyed reading, crocheting, playing cards, and going to the casino with her friend, Gert. Blanche was a 60 year member of the Birthday Club. Beyond all her activities, Blanche’s devotion to her family and friends was paramount in her life. She was a member of St. Catherine’s Catholic Church. She belonged to St. Theresa Mission for 30 years and was a life-long member of the Council of Catholic Women. Following the death of her husband, Blanche enjoyed traveling; she wintered in Casa Grande, Arizona for the past five years and continued to live on the family farm until her recent illness. Blanche is survived by her children David (Mary Jo) Kohler of Rochester, Mary (David) Schultz of Duluth, Kenneth (Gail) Kohler of Fargo, North Dakota, and Scott (Laura) Kohler of Redwood Falls; 12 grandchildren; six great-grandchildren; and her brother Leonard Kramer of Redwood Falls. She was preceded in death by her husband, James, in October 1984; her son John; and her brother Cornelius. Blessed be her memory.

The family of Blanche Genevieve Kohler created this Life Tributes page to make it easy to share your memories.

Send flowers to the Kohler family.