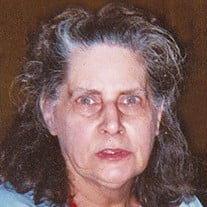 Beverly Radermacher, 72, of Beaver Falls died Tuesday, May 9, 2017 at Golden Living Center in Franklin. Funeral services will be held at 1 p.m. on Thursday, May 11, 2017 from Nelson-Hillestad Funeral Home in Redwood Falls with burial to follow in Beaver Falls Cemetery. Visitation will be held on Thursday, from noon until 1 p.m., at the funeral home. Arrangements are with Nelson-Hillestad Funeral and Cremation Service of Redwood Falls. E-mail condolences may be sent via www.nelson-hillestad.com. Beverly Jo Radermacher, the daughter of Truman and Naomi (Behrens) Brockway, was born July 29, 1944 in Waverly, Iowa. In 1951, she moved with her family to a farm in the rural Morgan/Franklin area. Beverly graduated from Franklin High School in 1963; as an adult she lived in Redwood Falls, then Delhi, Renville, Olivia and Montevideo. On February 12, 1993, Beverly married Ed Radermacher in Montevideo. They have resided in Beaver Falls since 2011. Beverly worked at Jennie-O in Willmar for a time but, for the most part, was a homemaker. She enjoyed sewing, crocheting, doing puzzles, playing cards, and listening to music. Beverly is survived by her husband Ed of Beaver Falls; son Allan Reynolds of Mississippi; granddaughter Andrea; two great-grandchildren and one on-the-way; step-daughter Amy Radermacher of Maynard; step-son Richard Radermacher of Maynard; step-grandchildren Ashley Neu, Jordan and Kyler Strommer; and six step-great-grandchildren. Also surviving are her siblings Jerry (Shirley) Brockway of Morton, Steven Brockway of Arizona, Janice (Gary) Simondet of Beaver Falls, Linda Okins of Marshall, and Karen Whittman of Arizona; and several nieces and nephews. She was preceded in death by her parents and her sister Marilyn. Blessed be her memory.

Beverly Radermacher, 72, of Beaver Falls died Tuesday, May 9, 2017 at Golden Living Center in Franklin. Funeral services will be held at 1 p.m. on Thursday, May 11, 2017 from Nelson-Hillestad Funeral Home in Redwood Falls with burial to follow... View Obituary & Service Information

The family of Beverly Jo Radermacher created this Life Tributes page to make it easy to share your memories.

Send flowers to the Radermacher family.