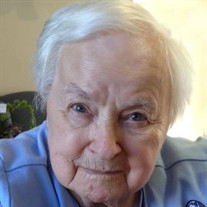 Betty Cocker, 90, of Redwood Falls died Thursday, April 6, 2017 at Sunwood Good Samaritan Care Center in Redwood Falls. Funeral services will be held at 10 a.m. on Tuesday, April 11, 2017 from St. Stephen Lutheran Church in Marshall. Burial will be held at a later date in Pilot Mound Cemetery in Pilot Mound. Visitation will be held Monday, April 10, 2017, from 5 until 7 p.m., at Nelson-Hillestad Funeral Home in Redwood Falls and will continue on Tuesday, from 9 until 10 a.m., at the church. Arrangements are with Nelson-Hillestad Funeral and Cremation Service of Redwood Falls. E-mail condolences may be sent via www.nelson-hillestad.com. Betty Elsie Cocker, the daughter of Peter and Margaret (Dickenson) Ruberg, was born January 24, 1927 in Badoura Township, Hubbard County, Minnesota. She grew up in Kandiyohi County and graduated from New London Spicer High School in 1946. Betty married Peter Andreen in 1947; they later divorced. Betty lived throughout Minnesota and North Dakota. She made her living cooking or cleaning, both as an employee and an independent contractor. Betty retired in 2003. On November 29, 1974 Betty married Keith Cocker and they made their home in Marshall. She was a member of St. Stephen Lutheran Church and was very active in Circle, quilting club, funeral and wedding committees – and any other task that was needed. Betty is survived by her son Phillip (Angie) Andreen of Warroad; and daughters Pamela Boogaard of Marshall, and Wendy Fox (Stan Hansen) of Redwood Falls; her grandchildren Vanessa, Elaine L., Cynthia, Bryan (Mandy), Cory (Brandi), and Betsie; 13-1/2 great-grandchildren; four great-great-grandchildren; and her brother Clifford (Bonnie) Ruberg of Spring Lake Park. She was preceded in death by her first husband, Peter, in 1994; second husband, Keith, in 2008; brother Donald; sister Ruth; and two great-grandchildren. Blessed be her memory.

The family of Betty E. Cocker created this Life Tributes page to make it easy to share your memories.

Send flowers to the Cocker family.