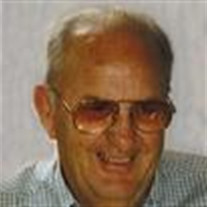 Beryl B. Brandt, 93, of Redwood Falls died Sunday, February 21, 2016 at Sunwood Good Samaritan Care Center in Redwood Falls. Funeral services will be held at 10:30 a.m. on Tuesday, March 1, 2016 from Gloria Dei Lutheran Church in Redwood Falls. Burial, with full military honors, will follow in the Redwood Falls Cemetery. Visitation will be held Monday, February 29, 2016, from 4 until 7 p.m. at Nelson-Hillestad Funeral Home in Redwood Falls and will continue on Tuesday, from 9:30 until 10:30 a.m., at the church. Arrangements are with Nelson-Hillestad Funeral and Cremation Service of Redwood Falls. E-mail condolences may be sent via www.nelson-hillestad.com. Beryl Boehm Brandt, the son of Charles W. and Ruby (Boehm) Brandt, was born January 22, 1923 in North Redwood. He attended schools in North Redwood and Redwood Falls. Following high school, Beryl worked at the North Redwood Farmers’ Elevator for two years. In September 1943, Beryl was inducted into the United States Army. He served his country in the European Theatre and was wounded in the Battle of Normandy. Beryl was awarded the Purple Heart and was honorably discharged in January 1946. Upon his return home, Beryl provided for and lived with his folks until their death. Beryl worked with the Farm Credit System in Redwood Falls for 36 years; he was Vice-President of Administration when he retired in 1984. He enjoyed recreation activities and traveling, including a trip to Europe and a visit in the Normandy, France area. He was a member of Gloria Dei Lutheran Church and served as the Brotherhood treasurer. Beryl belonged to the American Legion and Veterans of Foreign Wars. He is survived by his sister Velma (Thomas) Kingston of Anoka; nieces and nephews Susan (Richard) Nelson of Redwood Falls, Janet Brandt and Gregg Frankowski of Red Wing, Kathleen Kingston and Scott Kisling of Salt Lake City, Utah, Christine Kingston of Bloomington, Jeffrey (Bernice) Brandt of Eagan, Steven (Cathy) Brandt of Redwood Falls, Thomas (Pat) Kingston of Fergus Falls, and William (Nancy) Kingston of Rogers; and his good friend Ernest Teeri. Beryl was preceded in death by his parents, brother Percy, and a brother in infancy. May he rest in peace.

The family of Beryl B. Brandt created this Life Tributes page to make it easy to share your memories.

Send flowers to the Brandt family.