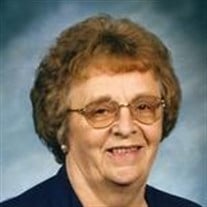 Bernice Houtkooper, 79, of Redwood Falls died Friday, January 21, 2011 at the Redwood Area Hospital. Funeral services will be held at 11 a.m. on Thursday, January 27, 2011 from Gloria Dei Lutheran Church in Redwood Falls with Pastors Joy Ekstedt and Bill Klavetter officiating. Burial will follow in the Redwood Falls Cemetery. Visitation will be held Wednesday, January 26, 2011, from 4 until 7 p.m., at the Nelson-Martin Funeral Home in Redwood Falls and will continue on Thursday at the church for one hour prior to services. The Nelson-Martin Funeral Service of Redwood Falls is handling the arrangements. E-mail condolences may be sent via www.nelsonmartinfuneralservice.com. Bernice Lila Houtkooper, the daughter of Walter O. and Ida (Jorstad) Torgerson, was born February 12, 1931 in Astoria, South Dakota. She grew up in Astoria and graduated from Astoria High School in 1949. Bernice attended General Beadle Teacher’s College, receiving her teacher’s certificate in 1950. On June 6, 1951, Bernice married Glenn Houtkooper at Wood Lake Lutheran Church in Astoria. The couple made their home in Canby for four years, then moved to rural Brandt, South Dakota in 1955, rural Astoria, South Dakota in 1957, Brookings, South Dakota in 1959 and Owatonna, Minnesota in 1963. In 1966, they moved to Redwood Falls where they have resided since. Bernice was a rural schoolteacher for two years, an Avon representative for 12 years, and – always – a mother to her five children. She was a member of Gloria Dei Lutheran Church where she was active in the Martha Circle, the quilting club, and on the funeral committee. Bernice belonged to Sewing Club from 1966 until 1990, and the 500 Card Club from 1966 until 1995. She is survived by her husband, Glenn, of Redwood Falls; and children Linda (Ray) Lomax of Bixby, Oklahoma, Peggy Cooper (Worth Madry) of Charlotte, North Carolina, David (Nancy) Houtkooper of Wabasha, Diane Houtkooper of Redwood Falls, and Ellen Houtkooper (Sharron Lund) of Redwood Falls. Also surviving are five grandchildren; six great-grandchildren; her sister Marge Lunde of Watertown, South Dakota, and brother Wally (Donna) Torgerson of Antigo, Wisconsin. Bernice was preceded in death by her parents and one brother. Blessed be her memory.

The family of Berniece Lila Houtkooper created this Life Tributes page to make it easy to share your memories.

Send flowers to the Houtkooper family.