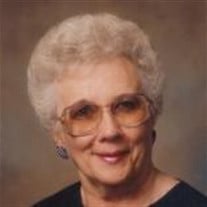 Beatrice “Bea” Brown, 85, of Redwood Falls, died Saturday, December 24, 2016 at Sunwood Good Samaritan Care Center in Redwood Falls. Funeral services will be held at 10:30 a.m. on Thursday, December 29, 2016 from Zion Danube United Methodist Church in Danube with burial in the Middle Creek Zion Cemetery. Visitation will be held on Wednesday, December 28, 2016 from 4 until 7 p.m. at Nelson-Hillestad Funeral Home in Redwood Falls and will continue on Thursday, from 9:30 until 10:30 a.m., at the church. The family prefers memorials directed to Sunwood Good Samaritan Care Center of Redwood Falls or Middle Creek Zion Cemetery. Arrangements are with Nelson-Hillestad Funeral and Cremation Service of Redwood Falls. E-mail condolences may be sent via www.nelson-hillestad.com. Beatrice Mary Brown, the daughter of Winfield and Hattie (Manthei) Becker, was born June 15, 1931 on the family farm in Henryville Township, Renville County, Minnesota. She lived her entire life in the Middle Creek Area. Bea received her formal education in the nearby country school and Redwood Falls High School, graduating in 1949. On July 7, 1967, Bea married Richard “Dick” Brown in Milbank, South Dakota and they made their home on the farm in Middle Creek. Bea was first and foremost a loving wife, mother and friend. She also held a number of jobs in the area including curator at the Redwood County Museum, secretary at the Redwood Falls Chamber of Commerce, and greeter at Pamida. Bea worked in the advertising department at the Redwood Gazette for many years and continued to contribute a column to its quarterly senior magazine until the time of her death. Bea was a life-long member of Middle Creek United Methodist Church where she served as a lay leader for 40 years. She dedicated 28 years to Renville County’s Flora Shooting Stars 4-H Club as an adult leader. Bea’s 4-H career culminated in 1987 when she was awarded the State 4-H Alumni Recognition Award. She loved and was proud of her community. Bea enjoyed taking drives, especially in the valley and Ramsey Park. She supported and cheered on her local sports teams and just loved meeting and visiting with people. Bea is survived by her husband Richard “Dick” Brown of Redwood Falls; and children Gwen Bohlke of Montevideo, Roxanne (Tim) Reski of Plymouth, Scott (Lori) Bohlke of Chicago, Illinois, and Craig (Lisa) Brown of North Mankato. Also surviving are her grandchildren Brian Reski (fiancé Trina Erickson), Greg Reski (special friend Cori Nelson), Danny (Holly) Bohlke, Anna (Dan) Slabek, Mary (Matt) Anderson, Broderick Brown, Bridget Brown, Bryn Brown, and Brett Brown; and great-grandchildren Luke and Grace Anderson. She was preceded in death by her brother and sister-in-law, Rev. Clinton (Phyllis) Becker. Blessed be her memory.

The family of Beatrice "Bea" Brown created this Life Tributes page to make it easy to share your memories.

Send flowers to the Brown family.