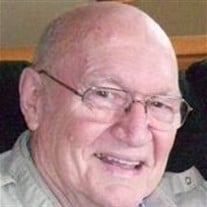 August Louis Krueger, the son of August A. and Viola A. (Jaros) Krueger, was born August 7, 1934 in Clements. He was one of eight children. He attended primary school in Clements and high school in Springfield. He entered the United States Air Force in 1952 as an aircraft support specialist, stationed at George AFB, California, with tours in France and Africa. He was honorably discharged in 1956. On April 25, 1957, Augie married Donna Lohaus at St. Michael’s Catholic Church in Morgan. They moved to Clements where Augie worked several jobs and retired as Office Manager with the Redwood Electric Cooperative. He also served as a caretaker of St. Joseph’s Catholic Church in Clements and was an active member of the church choir. He worked as the bookkeeper at St. Michael’s Catholic Church in Morgan. Augie took care of St. Joseph’s Catholic Cemetery; he was instrumental in taking it to a booklet explaining in detail the entire layout of the cemetery. He was a member of the American Legion Post in Clements and for many years provided counseling for those in Alcoholics Anonymous. Augie was a silent partner while Donna ran the Mark Twain Café. He also enjoyed outdoor cooking, puzzles, playing cribbage, and an occasional card game. August “Augie” Louis Krueger, beloved father, grandfather, and great grandfather entered into eternal life May 8, 2012, surrounded by his family. He had attained the age of 77 years, nine months, and one day. Augie is survived by his loving wife, Donna, of Clements; and children Ronald and Sheryl Krueger of Clements, Michael and Jeanne Krueger of Mountain Iron, Jeffrey and Lily Krueger of Las Vegas, Nevada, Jim Krueger of Clements, and Diane Schroeder and fiancé Rick Kleinsasser, both of Redwood Falls. Also surviving are 12 grandchildren and 11 great grandchildren; siblings Mary Ann (Nick) Saraceno of Wheatridge Colorado, Jay (Carol) Krueger of Puertecitos, Mexico, Marce (Kerm) Griffith of Medford Oregon, Ken (Nancy) Krueger of Princeton, and John (Edith) Krueger of Hillman. He was preceded in death by his parents August A. and Viola Krueger, sister Veronica (Harm) Elsing, brother Joseph (Cheryl) Krueger, and granddaughter Michelle Krueger. Blessed be his memory.

August Louis Krueger, the son of August A. and Viola A. (Jaros) Krueger, was born August 7, 1934 in Clements. He was one of eight children. He attended primary school in Clements and high school in Springfield. He entered the United States... View Obituary & Service Information

The family of August "Augie" Louis Krueger created this Life Tributes page to make it easy to share your memories.

August Louis Krueger, the son of August A. and Viola A. (Jaros)...

Send flowers to the Krueger family.