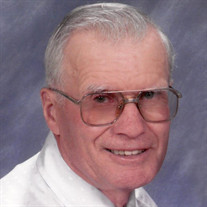 Arthur “Art” Henderson, age 88, of Redwood, MN died Sunday, November 14, 2021 at River Valley Health and Rehab in Redwood Falls, MN. A Funeral Service will be held at 10:00 a.m. on Friday, November 19, 2021, at First United Methodist Church in Redwood Falls, MN with burial to follow at Redwood Falls Cemetery. Visitation will be held 8:30 a.m. – 10 a.m on Friday, November 19, 2021, at the First United Methodist Church in Redwood Falls. Arrangements are with Nelson-Hillestad Funeral & Cremation Services of Redwood Falls. E-mail condolences may be sent via www.nelsonhillestad.com. Arthur “Art” Henderson was born October 18, 1933 to Edwin and Minnie (Buery) Henderson. He grew up in Redwood Falls, MN where he graduated from high school in 1951. Arthur served in the United States Army from 1953-1955. Arthur married Esther (Larsen) on August 18, 1963 at First United Methodist Church in Redwood Falls, MN. Together, Arthur and Esther moved to the family farm, where he enjoyed spending time in his shop tinkering on almost everything imaginable. He always had clean machinery and a clean car on Sunday morning for their drive to church. Arthur loved his family dearly and in January of 2018, Arthur and Esther moved into town to Garnette Gardens. Arthur is survived by his wife, Esther; children, Marie (Mike) Petry of Omaha, NE, Jim (significant other – Kathy Specchio) of Odessa, NY; three grandchildren and nine great-grandchildren. Arthur was preceded in death by his one brother and three sisters.

The family of Arthur "Art" Payton Henderson created this Life Tributes page to make it easy to share your memories.

Send flowers to the Henderson family.