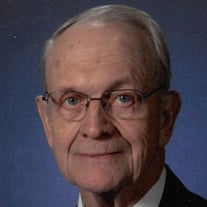 Arnold V. Iffert, 84, of Morgan, died Friday, May 24, 2019 at Divine Providence Nursing Home in Sleepy Eye, Minnesota. Funeral services will be held at 10:30 a.m. on Wednesday, May 29, 2019 at St. Michael’s Catholic Church in Morgan with burial to follow in the St. Michael’s Catholic Cemetery in Morgan. Visitation will be held on Tuesday, May 28, from 4 until 7 pm. The Knights of Columbus will lead the Rosary at 4:00 pm at the Nelson-Hillestad Funeral Home in Morgan. Visitation will continue on Wednesday, from 9:30 until 10:30 a.m. at the church. Arrangements are with Nelson-Hillestad Funeral and Cremation Service of Morgan. E-mail condolences may be sent via www.nelson-hillestad.com. Arnold Vincent Iffert, the son of Hubert and Clara (Weber) Iffert was born on September 3, 1934 in Morgan. He was raised on the family farm in Morgan Township and attended St. Michael’s Catholic School and graduated from Morgan Public High School. Arnie married Emma Pohlen on November 6, 1965 at St. Anne’s Catholic Church in Wabasso, Minnesota. They spent their life farming on the family farm. After retiring in 1999 they stayed on the farm until 2016 and then moved into Morgan. Arnie was an active member of St. Michael’s Catholic Church. He served on the Board of Education as Chairman, St. Michael’s Parish Council, Region II Pastoral Council as Parish representative, Knights of Columbus as Grand Knight, Financial Secretary, Fourth Degree Knights of Columbus and Catholic Aid Association. Arnie served at St. Michael’s as commentator, lector, rosary leader, choir member and C.C.D. teacher, meditation reader for the 5 First Saturdays Devotions and served on the Liturgy Committee. Arnie also served on the Harvest Land Cooperative Board of Directors and the Renville Coop Transport Assn – Board of Directors. He also served as President of the Board of Directors of Gil-Mor Manor, Vice President, President and Tail Twister of the Morgan Lions’ Club. Arnie’s hobbies were reading, putting together puzzles and visiting with family and friends. Arnie was a very generous person. His dry sense of humor was enjoyed by most. Arnie survived the polio epidemic of the late forties and early fifties. He recovered enough to be quite successful and happy. Within the last 5-6 years he became affected with ‘Post Polio Syndrome’ and this was part of his decline in his health. Arnold is survived by his wife Emma of 53 years, children, daughter Michelle (Dennis) Poppen of Sibley, Iowa along with their children, Rachel, David and Ben. Daughter Lori (Mark) Haman of Mankato, Minnesota along with their children, Josie and Jenna. Surviving siblings are brother, Florian (Joyce) Iffert of Kokomo, Indiana and sister, Dolores Russell of Madelia, Minnesota. He is also survived by many nieces and nephews. He is preceded in death by his parents, Hubert and Clara Iffert and brother Gerald Iffert. Blessed be his memory.

The family of Arnold V. Iffert created this Life Tributes page to make it easy to share your memories.

Send flowers to the Iffert family.