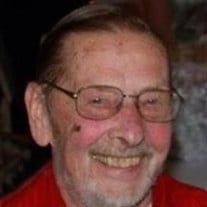 Arlis Koehn, 83, of Redwood Falls passed away, surrounded by his family, on Thursday, April 13, 2017 at Redwood Area Hospital. Memorial Services will be held at 1 p.m. on Tuesday, April 18, 2017 from Nelson-Hillestad Funeral Home in Redwood Falls. Inurnment, with military honors, will follow at Redwood Falls Cemetery. Visitation will be held Tuesday, from 11 a.m. until 1 p.m., at the funeral home. Arrangements are with Nelson-Hillestad Funeral and Cremation Service of Redwood Falls. E-mail condolences may be sent via www.nelson-hillestad.com. Arlis Dale Koehn, the son of Charles and Gertrude (Krueger) Koehn, was born September 6, 1933 in Jackson. He grew up in Lakefield and graduated from Lakefield High School in 1951. Arlis proudly served in the United States Army during the Korean War. Following his honorable discharge, Arlis returned to Lakefield. On August 31, 1957, Arlis married Shirley Coddington. They spent their early years in St. Clair, West Concord, Eagle Lake and Mankato and for the past 51 years have made their home in Redwood Falls. Arlis worked in the retail grocery business in Mankato for several years then, in 1969, he began his career as sales rep for Gerber Baby Foods. He truly enjoyed his job and was proud to be a part of the Gerber family. Arlis retired from Gerber in 1996 after 27 wonderful years of employment. Following his retirement, Arlis enjoyed working part time, stocking shelves at Tersteegs. He was a member of First United Methodist Church in Redwood Falls. In his younger years, Arlis enjoyed fishing, pheasant hunting and bowling. He was an avid golfer and was a member of the Redwood Falls Golf Club for many years. Arlis and Shirley enjoyed Tuesday night date night at Jackpot, which was usually dinner followed by playing a few machines. He is survived by his wife of 59 years, Shirley of Redwood Falls; daughter Deb (Paul) Frank of Redwood Falls; sons Michael (LuAnn) Koehn of North Mankato, and Jeffrey (Jeanne) Koehn of Redwood Falls; six grandchildren; nine great-grandchildren; sisters Leila (Merle) Sellman of Naples, Florida, Diann Loff of New Hope, Shirley (Arlund) Brockman of Rapid City, South Dakota; and many nieces and nephews. Arlis was preceded in death by his parents; sisters Harriet Bonick and Marlys Allen; and great-grandson Beckett Helgeson. Blessed be his memory.

Arlis Koehn, 83, of Redwood Falls passed away, surrounded by his family, on Thursday, April 13, 2017 at Redwood Area Hospital. Memorial Services will be held at 1 p.m. on Tuesday, April 18, 2017 from Nelson-Hillestad Funeral Home in Redwood... View Obituary & Service Information

The family of Arlis Koehn created this Life Tributes page to make it easy to share your memories.

Arlis Koehn, 83, of Redwood Falls passed away, surrounded by...

Send flowers to the Koehn family.