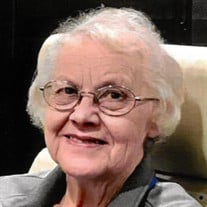 Ardell Marylyn (Johnson) Lothert, age 80 of Redwood Falls passed away at 8:30 a.m on Friday, October 16th at her home. Funeral services will be held at 11:00 a.m. Thursday, October 22nd at St. John's Lutheran Church in Redwood Falls. Visitation will be held 5:00-7:00 p.m. on Wednesday at Nelson-Hillestad Funeral Home in Redwood Falls. Visitation will continue one hour prior to the service. Interment will be in the Morton Cemetery. Arrangements are with Nelson-Hillestad Funeral and Cremation Service of Redwood Falls. E-mail condolences may be sent via www.nelson-hillestad.com. Ardell Marylyn Lothert was born on February 14, 1940, in Southbrook Township (North of Heron Lake) Minnesota, to Lawrence and Ella (Mattison) Johnson. She was baptized on April 7th, 1940 and confirmed in faith on May 29th, 1955. After graduation from Walnut Grove High School, Ardell completed the New Ulm School of Practical Nursing program with her LPN degree in 1961. She worked as LPN at New Ulm Union Hospital for 4 years until united in marriage with Gene Lothert on September 17, 1965. After Gene completed his service in the United States Air Force in Mount Clemens, Michigan, they moved back to Minnesota where they dairy farmed for 15 years residing at farms near Heron Lake and Revere while raising their family. In 1984, they moved to Redwood Falls and farmed an additional 8 years. After farming, Ardell worked at Artysen Technologies in Redwood Falls for 15 years and then retired. Ardell was blessed with 5 children and 9 grandchildren. Over the years she enjoyed cooking, baking, sewing, raising her children, holding her grandbabies and spending time with her sisters. Ardell was dedicated to her faith; it was the cornerstone of how she lived her life. Ardell's children and grandchildren were her life's greatest joy. Ardell is now free of suffering from health challenges she encountered in recent months and is at peace now with our Heavenly Father. Ardell touched so many people with her warm smile, caring heart, listening ears, words of encouragement and testimony of faith. She will be missed beyond measure. Ardell is survived by her husband, Gene Lothert of 55 years. Sons, Gary Lothert of Redwood Falls, Dale Lothert with his wife Irene of New Ulm, MN along with their children Logan and Skyler. Daughters, Cheryl (Lothert) Kiecker with her husband LeRoy of Mankato, MN along with their children Jacob, Ethan and Hannah. Jolene (Lothert) Ludwig with her husband Ryan of Sycamore, IL and their children Hudson and Harper. Christine (Lothert) Armstrong with her husband Nathan of Mankato, MN along with their children Brayden and Wyatt. Sister, Delores (Johnson) Toltzman. Ardell was preceded in death by her father, Lawrence, her mother, Ella, her brothers Delbert and Virgil and sister, Pauline. Blessed be her memory.

The family of Ardell Marylyn Lothert created this Life Tributes page to make it easy to share your memories.

Send flowers to the Lothert family.