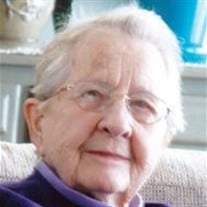 Angeline “Angie” Christensen, 100, of Redwood Falls died Sunday, May 8, 2016 at Season’s in Redwood Falls. Funeral services will be held at 11 a.m. on Saturday, May 14, 2016 from Gloria Dei Lutheran Church in Redwood Falls with burial to follow in Sundown Lutheran Cemetery, rural Springfield. Visitation will be held on Saturday, from 10 until 11 a.m., at the church. The family prefers memorials be directed to Redwood Area Hospice, Sundown Lutheran Church, or Gloria Dei Lutheran Church. Arrangements are with Nelson-Hillestad Funeral and Cremation Service of Redwood Falls. E-mail condolences may be sent via www.nelson-hillestad.com. Francis Angeline Christensen, the daughter of Wilmont and Emma (Brazil) Daby, was born February 28, 1916 on a farm in Birch Coulee Township, Renville County. She was baptized and later confirmed at the Methodist Church in Morton. Angie grew up in Birch Coulee Township, Beaver Falls and Morton. She began her formal education in Beaver Falls at the age of six. The next year, her family moved to the Greenslit farm and Angie attended country school. When she was in eighth grade, the family moved closer to Morton and Angie attended Morton High School. Angie graduated high school in 1934 and then worked in Morton and Olivia, doing housework. She moved to Minneapolis and continued doing housework while going to night school for her business degree. At the age of 26, Angie moved to Redwood Falls and worked at the OPA office during World War II. She began working at the State Bank in Redwood Falls in 1945. On June 18, 1949, Angeline married Byron Christensen in Redwood Falls and they made their home in Clements. Angie continued her employment at the State Bank until 1952, when she stayed home to raise her family. She returned to work at the bank in 1964 and was employed there until retiring on her birthday in 1978. She was a member of Sundown Lutheran Church and WELCA, serving as treasurer for two years. Angie also belonged to the American Legion, VFW, and DAV auxiliaries. She served two terms as president of the American Legion Auxiliary and was treasurer for many years. Angie served as auditor for the supervisory committee of the Clements Credit Union for several years. She is survived by her children Paul (Cecilia) H. Christensen of Chaska, and Joy (Philip) Asao of Mound; and grandsons John Christensen, Ansel Christensen, and Martin Asao. She was preceded in death by four brothers and two sisters. Blessed be her memory.

The family of Angeline "Angie" Christensen created this Life Tributes page to make it easy to share your memories.