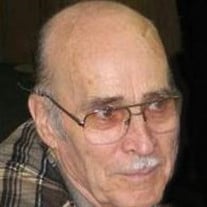 Louie Robinson, 80, of Morgan died Saturday, September 13, 2014 at Abbott-Northwestern Hospital in Minneapolis. Services will be held at 9 a.m. on Wednesday, September 17, 2014 from St. John Lutheran Church in Morgan. Burial, with military honors, will follow at the church cemetery. Visitation will be held on Tuesday, September 16, 2014, from 4 until 7 p.m., at Nelson-Martin Funeral Home in Morgan and will continue on Wednesday at the church for one hour prior to services. Arrangements are with Nelson-Martin Funeral Service of Morgan. E-mail condolences may be sent via www.nelsonmartinfuneralservice.com. Andrew Louis “Louie” Robinson, the son of George and Phoebe (Rediske) Robinson, was born January 31, 1934 in Kerrik, Minnesota. When he was eight years old, he moved with his family to California. Following the death of his father, the family returned to Northern Minnesota and later, in 1945, settled in Redwood Falls. Louie graduated from Redwood Falls High School in 1953 and immediately joined the United States Army. He served his country during the Korean Conflict, and was stationed in Germany. On December 22, 1956, Louie married Janice Struckman and they lived in Redwood Falls for two years before moving to Morgan in 1958. Louie worked for Morgan Grain & Feed, Minnesota Valley Road Construction, and – for the past 25 years – Jackpot Junction Casino. He loved being busy and was always ready to drop everything to help someone in need. Louie could fix any motor – even those that seemed ready to junk. He was a jack of all trades. Louie loved hunting, fishing, and just being outside. He had a deep devotion and love for his family. Louie enjoyed his job – especially all the visiting and being around people. He was an excellent cook and enjoyed doing the grilling for family gatherings. Louie loved westerns. He is survived by his children Rob Robinson of Atwater, Jan (Alan) Egge of Pennock, Ron (Cynthia) Robinson of Redwood Falls, Sheryl Robinson of New Ulm, and Troy (Pam) Robinson of Pennock; 18 grandchildren; 21 great-grandchildren; sisters Sophie Kiecker of Fairfax, and Charlotte Schmidt of St. Louis Park; and sister-in-law Edna Kalk of Morgan. Louie was preceded in death by his wife Janice; daughter Kerri; one granddaughter; one great-granddaughter; one sister; and three brothers. Blessed be his memory.

The family of Andrew "Louie" Louis Robinson created this Life Tributes page to make it easy to share your memories.

Send flowers to the Robinson family.