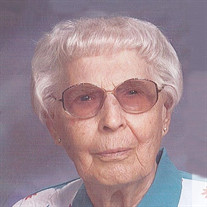 Amanda Zick, 95, of Redwood Falls died Wednesday, March 2, 2011 at Wood Dale Home in Redwood Falls. Funeral services will be held at 10:30 a.m. on Saturday, March 5, 2011 from St. John Evangelical Lutheran Church in Redwood Falls with Rev. Michael J. Otterstatter officiating. Burial will follow at the Redwood Falls Cemetery. Visitation will be held Friday, March 4, 2011, from 5 until 8 p.m., at Nelson-Martin Funeral Home in Redwood Falls and will continue on Saturday at the church for one hour prior to services. The family requests memorials be made to St. John Evangelical Lutheran Church or St. John School of Redwood Falls. Arrangements are with Nelson-Martin Funeral Service of Redwood Falls. E-mail condolences may be sent via www.nelsonmartinfuneralservice.com. Amanda Helene Ida Panitzke, the daughter of Ferdinand and Louise (Jordan) Panitzke, was born January 17, 1916 in Redwood Falls. She was baptized and confirmed at St. John’s Lutheran Church in Redwood Falls. Amanda attended country school at District 63 in Redwood Falls Township. She spent her early years working as a helper for many of her family members and was always there to help when a new baby was born or someone was ill. On June 5, 1946 Amanda married Otto Zick at St. John’s Lutheran Church in Redwood Falls. After marriage, they farmed Otto’s family farm in Granite Rock Township, Redwood County, working hard and enjoying many happy years watching their family grow. Amanda was a member of Ladies Aid and a Sunday school teacher for many years at St. John’s of Vesta. The couple retired from farming in 1974 and returned to Redwood Falls where Amanda worked as a housekeeper, then as matron at Gilwood Haven from 1980 to 2001. Amanda was a member of St. John Redwood Falls Ladies Aid and quilting group. Her family was very important to her and she spent many hours playing, reading stories and teaching songs to her grandchildren. She loved to watch them participate in their events and always gave them positive encouragement. Amanda spent many hours recording the family history through photo albums and scrapbooks. She enjoyed crocheting and making quilts for everyone in her family. Amanda loved working in her flower garden, especially with her beautiful irises. She moved to Garnette Gardens in April 2005 and then to Wood Dale Home in January 2008 where she was residing when she went home to her Lord and Savior on March 2, 2011. Amanda is survived by her sons and daughters-in-law Steven and Carmen of Lucan, Gary and Linda of Redwood Falls, and David and Lynne of Milroy. Also surviving are her eight grandchildren and their families – Joanne (Brad) Kletscher and their children Stephanie and Stephen of Woodbury; Jeffrey (Kristine) Zick and their children Logan, Matthew, and Erika of Farwell; Gregory Zick of Washington, D.C.; Ashley (Tony) Lillie and their children Alexis, Lauren and Michael of Eagan; Lisa (Del) Cerney and their children Alicia and Madison of Plymouth; Lori (Jack) Slahetka and their daughter Sadie of Keystone, Colorado; Ryan (Jennifer) Zick and their children Evelyn, Owen and Bennett of Chaska; and Scott (Rebecca) Zick and their children Konnor, Lauren and Griffin of Milroy. She is also survived by brothers-in-law Hugo (Gene) Zick and Orville Stofferahn; and many nieces and nephews. She was preceded in death by her parents; her husband Otto; brothers Herman, August, Martin and Herbert, and Irwin in infancy; and sisters Anna, Bertha, Erna and Martha. Blessed be her memory.

The family of Amanda Helene Ida Zick created this Life Tributes page to make it easy to share your memories.

Send flowers to the Zick family.