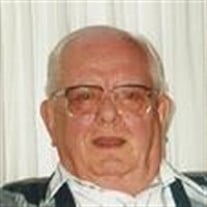 Alvord Dammann, 88, of Sanborn died Monday, August 22, 2011 at Seasons hospice in Redwood Falls. Visitation will be held Wednesday, August 24, 2011, from 4 until 6 p.m. at the Nelson-Martin Funeral Home in Redwood Falls. A private family service will be held at 10:30 a.m. on Thursday, August 25, 2011 with burial to follow in the Sanborn Cemetery. Arrangements are with Nelson-Martin Funeral Service of Redwood Falls. E-mail condolences may be sent via www.nelsonmartinfuneralservice.com. Alvord J. Dammann, the son of John and Gertrude Dammann, was born November 12, 1922 at his parents’ home in Sanborn. He was baptized and confirmed at the Sanborn United Methodist Church. Alvord received his formal education in Sanborn Public School and graduated from Sanborn High School. He was inducted into the United States Army and served from February 1943 until his honorable discharge on January 1, 1946. Alvord was stationed in England and France, serving with the 69th Armored Battalion as part of the Bugle Corp and then in the supplies and mail division. On August 12, 1949 Alvord married Marion Karow and they made their home in Sanborn. He worked in masonry, delivered newspapers to area towns, and worked in Olson’s garage before he and his brother, Marlin, leased the new Flying Red Horse Mobil Station, which became Dammann’s Mobil. In 1955, the station was sold and Alvord became the Postmaster in the Sanborn Post Office, a position he held until retiring, in 1984, at the age of 62. Alvord was a lifetime resident of Sanborn. He was a member of the Sanborn United Methodist Church where he served as church treasurer for nine years. He also belonged to the American Legion and served on the school board. Alvord enjoyed tinkering with cars. He memorized license plate numbers and liked to do word search puzzles. Alvord also collected stamps and had a big interest in knowing everything he could about trains. He is survived by his daughters Nancy Partch of Redwood Falls, and Judy Montonye of Hoffman; a sister Genola Busse; and a grandson Wesley Partch. He was preceded in death by his parents; his wife Marion; and his brothers Marlin, Arlenn, and John E. Dammann. Blessed be his memory.

The family of Alvord J. Dammann created this Life Tributes page to make it easy to share your memories.

Send flowers to the Dammann family.