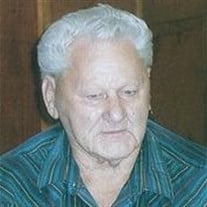 Alvin “Al” Gewerth, 84, of Morton died Wednesday, January 25, 2012 at Sunwood Good Samaritan Care Center in Redwood Falls. Mass of Christian Burial will be held at 10:30 a.m. on Tuesday, January 31, 2012 from St. John’s Catholic Church in Morton. Burial, with military honors, will follow in the church cemetery. Visitation will be held Monday, January 30, 2012 from 4 until 8 p.m., with a Knights of Columbus Rosary and Parish Prayer Service at 7 p.m., all at the Nelson-Martin Funeral Home in Redwood Falls. Visitation will continue at the church on Tuesday for one hour prior to services. Arrangements are with Nelson-Martin Funeral Service of Redwood Falls. E-mail condolences may be sent via www.nelsonmartinfuneralservice.com. Alvin Sylvester Gewerth, the son of Alfred and Irene (Revier) Gewerth, was born July 31 ,1927 in Sherman Township, Redwood County. He grew up in the rural Morton, Morgan and Franklin areas. Al received his elementary school education in District 100 rural school and attended high school in Morton and Morgan. Al was inducted into the United States Army in September 1950 and served in Korea until his honorable discharge in September 1952. On May 5, 1956, Al married Leona Vogel at St. Anne’s Catholic Church in Wabasso. The couple settled on a farm near Wabasso where Al farmed. In 1969, they moved to Morton and Al began his employment with the Minnesota Highway Department. He worked for the highway department for 23 years, retiring in 1992. Al looked forward to winters as his favorite part of the job was plowing snow! He was a member of St. John’s Catholic Church in Morton and the Knights of Columbus. He also belonged to the Wanda American Legion post, the Morgan V.F.W. post, and the Disabled American Veterans in New Ulm. Al enjoyed working and, after he retired, he helped his elderly neighbors by mowing lawns, tilling gardens and blowing snow. Al volunteered at the Redwood Clothing Center and hauled clothes to the main center. He especially enjoyed spending time with his grandkids, playing cards and Bingo, going on trips, visiting with people and fishing. He is survived by his children Raymond Gewerth of Redwood Falls, Melvin (Julie) Gewerth of Morton, Dennis Gewerth of Delhi, and Diane Gewerth of Atwater; grandchildren Heather (Ryan), Brittany (Matt), Matthew, Brian, Jason, Samantha (Ricardo), Amanda, Stephanie, Jonathan, and Kayla; seven great-grandchildren; and two step-great-grandchildren. Also surviving are his sister Mary Lou Bailey of Morton; sisters-in-law Helen Gewerth of Redwood Falls and Evelyn Gewerth of Morton; brother-in-law Loren Halder of Bird Island; and special friend Donna McNair of Redwood Falls. Al was preceded in death by his parents; his wife Leona; his sister Betty; his brothers Joe and Donald; sister-in-law Alvera; and special friend June Lehman. Blessed be his memory.

The family of Alvin "Al" Sylvester Gerwerth created this Life Tributes page to make it easy to share your memories.

Send flowers to the Gerwerth family.