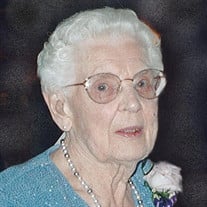 Agnes Schultz, 93, of Fairfax and formerly of Morgan died Tuesday, June 14, 2011 at the Fairfax Community Home. Funeral services will be held at 10:30 a.m. on Saturday, June 18, 2011 from Zion Evangelical Lutheran Church in Morgan with Rev. Kurt Hagen and Rev. Scott Muske officiating. Burial will follow in Zion Eden Evangelical Lutheran Cemetery, rural Morgan. Visitation will be held at the church on Friday, June 17, 2011, from 5 until 8 p.m. and will continue on Saturday for one hour prior to services. Funeral services are with Nelson-Martin Funeral Service of Morgan. E-mail condolences may be sent via www.nelsonmartinfuneralservice.com. Agnes Florence Schultz, the daughter of August and Ida (Lehne) Kamolz, was born June 26, 1917 in Springfield. She spent her early childhood in Springfield and moved to South Dakota with her family in 1923. Agnes grew up in Tea and Canton, South Dakota and received her formal education in Canton. She moved to Vesta, Minnesota in 1933 where she was confirmed. Agnes then moved to Redwood Falls where she worked until her marriage. On August 31, 1938, Agnes married Sylvester Schultz at Morgan and the couple made their home in Morgan. Agnes and Sylvester owned and operated the Morgan Hatchery for nearly 40 years and also built and operated the Morgan Roller Rink. Following their retirement in 1979, the couple continued to live in Morgan until moving to Countryview Estates in Fairfax in 2004. Agnes was a member of Zion Evangelical Lutheran Church in Morgan and was active in the Ladies’ Aid. She also belonged to the V.F.W. Auxiliary. Agnes enjoyed bowling, crocheting, and playing Bingo as well as playing cards with her card group. She also enjoyed decorating wedding, confirmation, graduation and birthday cakes. Agnes loved gardening and flowers. Agnes is survived by her children Diane (Robert) Klingseisen of Shoreview, Janet (Larry) Carruth of Hibbing, Mary Lou (Howard) Voelz of Morgan, and Denise (Tom) Palmer of Fairfax; 14 grandchildren; 15 great-grandchildren; her foreign exchange daughter Brigitta Moraw of Austria; and her half-brother Gerald Korstad of Rochester. She was preceded in death by her husband, Sylvester, in 2007; her brothers Vincent Kamolz, Walter Kamolz, and Ted Arndt; her sisters Elva Elg and Lydia Kamolz; and her half-sister Geraldine Korstad. Blessed be her memory.

Agnes Schultz, 93, of Fairfax and formerly of Morgan died Tuesday, June 14, 2011 at the Fairfax Community Home. Funeral services will be held at 10:30 a.m. on Saturday, June 18, 2011 from Zion Evangelical Lutheran Church in Morgan with Rev.... View Obituary & Service Information

The family of Agnes Florence Schultz created this Life Tributes page to make it easy to share your memories.

Agnes Schultz, 93, of Fairfax and formerly of Morgan died Tuesday,...

Send flowers to the Schultz family.